Prince Grigory Aleksandrovich Potemkin-Tavricheski (1739– 1791). Russian military leader, statesman, nobleman and favourite of Catherine the Great. He died during negotiations over the Treaty of Jassy, which ended a war with the Ottoman Empire that he had overseen.

- "At twenty-two, Potemkin was tall and slim, with thick auburn hair." https://erenow.com/biographies/catherinethegreat/59.html 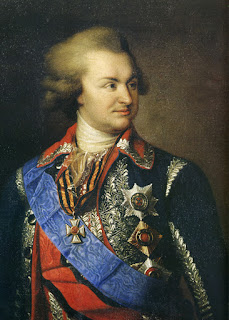