The Hon. George Lamb MP (1784 – 1834). British politician and writer.
He was the youngest son of Peniston Lamb, 1st Viscount Melbourne, and his wife Elizabeth, and the brother of William Lamb, 2nd Viscount Melbourne, Frederick Lamb, 3rd Viscount Melbourne, and Emily Lamb, Countess Cowper.
He became a barrister at Lincoln's Inn, and was Member of Parliament for Westminster from March 1819 to March 1820, and for Dungarvan from 1822 until his death. He served in Earl Grey's administration as Under-Secretary of State for the Home Department from 1830 until his death.
His comic opera Whistle for it was produced in 1807, and his adaptations of Timon of Athens in 1816. His most important work, a translation of the poems of Catullus, was published in 1821.


- "Lamb, a burly, red-haired, boisterous individual, once knocked down Byron’s friend Scrope Davies for calling his mother a whore." http://www.historyofparliamentonline.org/…/lamb-hon-george-… 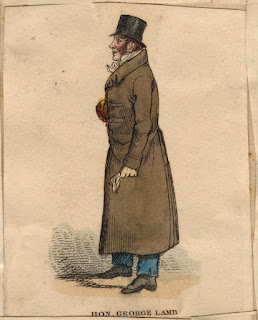