Camille Jenatzy (1868 - 1913). Belgian race car driver. He is known for breaking the land speed record three times and being the first man to break the 100 km/h barrier.

- "He was nicknamed Le Diable Rouge ("The Red Devil") after the colour of his beard." https://en.wikipedia.org/wiki/Camille_Jenatzy

- "Bosch's "Red Devil," created in the early 1900s to promote the company's ignition components, was based on racer Camille Jenatzy. The red-haired Belgian driver was noted for his flamboyant appearance including a pointed beard, flowing duster, and goggles pushed atop his head." https://www.thehenryford.org/…/digital-co…/artifact/446540/…

- "Why was he called a “red devil”? The answer is simple. Jenatzy had red hair and a red beard and the coat he wore to protect himself from the dust that was kicked up from the poor quality roads of the time was also red. Unfortunately, all that is lost in the historic black and white footage that still exists. It was these colors that inspired Klinger, as an artist, to make red the dominant hue for the motif." https://blog.bosch.com/…/camille-jenatzy-racing-driver-red…/ 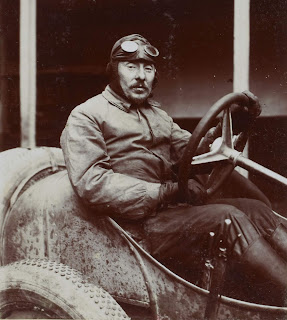