Anne Meara (1929 – 2015). American actress and comedian. Along with her husband Jerry Stiller, she was one-half of a prominent 1960s comedy team, Stiller and Meara. She also was featured on stage, in television, and in numerous films, and later she became a playwright. Mother of actor Ben Stiller.


- "Red-haired actress and comedian who first found fame as part of a comedy act with her husband, Jerry Stiller." https://www.allmusic.com/…/anne-meara-mn0000863753/biography 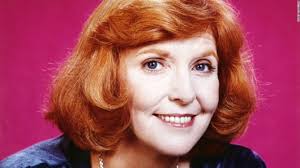