Lester William Polsfuss (1915 – 2009), known as Les Paul. American jazz, country, and blues guitarist, songwriter, luthier, and inventor. He was one of the pioneers of the solid-body electric guitar. He is credited with many recording innovations. Although he was not the first to use the technique, his early experiments with overdubbing (also known as sound on sound), delay effects such as tape delay, phasing effects and multitrack recording were among the first to attract widespread attention.


- "His first performances were for the people of Waukesha, where he was known as Red Hot Red, inspired by his red hair." http://www.waukeshaguitartown.com/les-paul-history/ 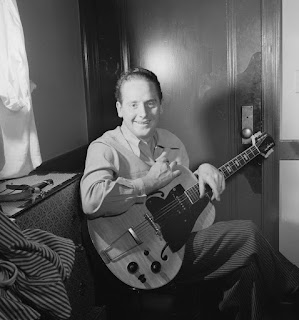