Phocas (Latin: Flavius Phocas Augustus). Byzantine Emperor from 602 to 610. The early life of Phocas is largely unknown, but he rose to prominence in 602, as a leader in the revolt against Emperor Maurice. Phocas captured Constantinople and overthrew Maurice on 23 November 602, and declared himself as Byzantine Emperor on the same day. Phocas was an incompetent leader, both of the administration and army, and under him the Byzantine Empire was threatened by multiple enemies, with frequent raids in the Balkans from the Avars and Slavs, and a Sassanid invasion of the eastern provinces.

- "His diminutive and deformed person, the closeness of his shaggy eyebrows, his red hair..." https://books.google.it/books…

- "He was deformed, of a terrific aspect, with red hair, shaggy meeting eyebrows and a scarred cheek." https://books.google.it/books… 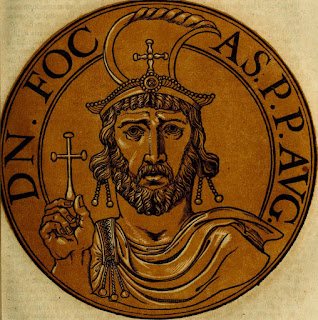