Donald "Ginger" McCain (1930 – 2011). English horse trainer who led the champion steeplechaser Red Rum to three Grand National victories in the 1970s. A former national serviceman in the Royal Air Force as a motorcycle despatch rider, he was also a member of the RAF scrambling team.

- "He earned the nickname “Ginger” for his red hair." https://www.washingtonpost.com/…/…/19/gIQAFuDSgK_story.html…

- "The son of a dispatch manager, Donald McCain, or Ginger as he would universally become known due to the colour of his hair, was born on 21 September, 1930 in humble surroundings at Birkdale, Southport." https://eclipsemagazine.co.uk/grand-national-2015-ginger-m…/ 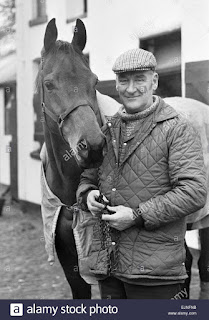