Harry Herbert Bennett (1892 – 1979). Former boxer and ex-Navy sailor, was an executive at Ford Motor Company during the 1930s and 1940s. He was best known as the head of Ford’s Service Department, or Internal Security. While working for Ford, his union busting tactics, of which the Battle of the Overpass was a prime example, made him a foe of the United Auto Workers [see also Walter Reuther]. He was fired in 1945 by Henry Ford II, and died in Los Gatos, California, on January 4, 1979, of an undisclosed cause.


- "Red-haired Harry Bennett was five feet, six inches tall--built like a fire hydrant and just as strong. He cultivated his tough guy image by wearing a fedora, a hand gun, and a bow tie. People who knew him said he was fearless." https://fornology.blogspot.com/…/henry-fords-tough-guy-harr…

- "The red-haired, bowtie-wearing Bennett projected a tough-guy image despite his small stature. He carried guns and conducted target practice in his office in the basement of Ford's administration building." http://www.autonews.com/…/harry-bennett:-henry-fords-chief-… 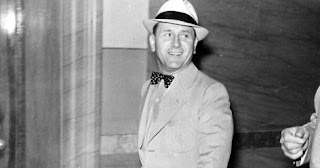