Augustus Edwin John (1878 – 1961) Welsh painter, draughtsman, and etcher. For a short time around 1910, he was an important exponent of Post-Impressionism in the United Kingdom. He was the brother of the painter Gwen John.
"Augustus was celebrated first for his brilliant figure drawings, and then for a new technique of oil sketching. His work was favourably compared in London with that of Gauguin and Matisse. He then developed a style of portraiture that was imaginative and often extravagant, catching an instantaneous attitude in his subjects."
By the 1920s John was Britain's leading portrait painter. John painted many distinguished contemporaries, including T. E. Lawrence, Thomas Hardy, W. B. Yeats, Aleister Crowley, Lady Gregory, Tallulah Bankhead, George Bernard Shaw, the cellist Guilhermina Suggia, the Marchesa Casati and Elizabeth Bibesco. Perhaps his most famous portrait is of his fellow-countryman, Dylan Thomas.
Father of Amaryllis Fleming. 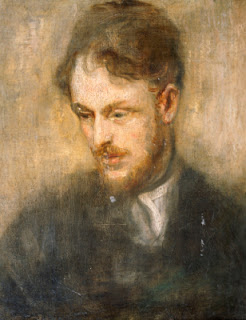