William Farel (1489 – 1565), Guilhem Farel or Guillaume Farel. French evangelist, Protestant reformer and a founder of the Reformed Church in the Principality of Neuchâtel, in the Republic of Geneva, and in Switzerland in the Canton of Bern and the (then occupied by Bern) Canton of Vaud. He is most often remembered for having persuaded John Calvin to remain in Geneva in 1536, and for persuading him to return there in 1541, after their expulsion in 1538. They influenced the government of Geneva to the point that it became the "Protestant Rome", where Protestants took refuge and non-Protestants were driven out. Together with Calvin, Farel worked to train missionary preachers who spread the Protestant cause to other countries, and especially to France.

- "But the red-haired, fiery Farel thundered that God would curse his labors if he did not obey." https://books.google.it/books…

- "A powerful evangelist with fiery red hair, Farel had been leading the cause of reform in Geneva and was in need of help." https://books.google.it/books… 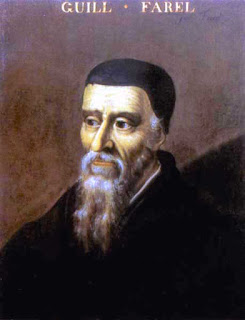