Andrey Yanuaryevich Vyshinsky (1883 – 1954). Soviet politician, jurist and diplomat.
He is known as a state prosecutor of Joseph Stalin's Moscow trials and in the Nuremberg trials. He was the Soviet Foreign Minister from 1949 to 1953, after having served as Deputy Foreign Minister under Vyacheslav Molotov since 1940. He also headed the Institute of State and Law in the Soviet Academy of Sciences.

- "Stalin's sidekick was a red-haired lawyer born in Odessa, son of a well-off Baku family with noble Polish antecedents..."  http://webcache.googleusercontent.com/search… 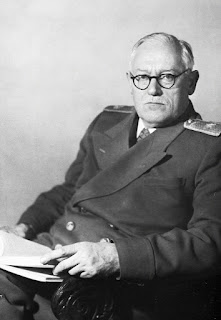