James Keir Hardie (1856 – 1915). Scottish trade unionist and politician. He was a founder of the Labour Party, and served as its first parliamentary leader from 1906 to 1908.
Hardie was born in Newhouse, Lanarkshire. He started working at the age of seven, and from the age of 10 worked in the Lanarkshire coal mines. With a background in preaching, he became known as a talented public speaker and was chosen as a spokesman for his fellow miners. In 1879, Hardie was elected leader of a miners' union in Hamilton and organised a National Conference of Miners in Dunfermline. He subsequently led miners' strikes in Lanarkshire (1880) and Ayrshire (1881). He turned to journalism to make ends meet, and from 1886 was a full-time union organiser as secretary of the Ayrshire Miners' Union.
Hardie initially supported William Gladstone's Liberal Party, but later concluded that the working class needed its own party. He first stood for parliament in 1888 as an independent, and later that year helped form the Scottish Labour Party. Hardie won the English seat of West Ham South as an independent candidate in 1892, and helped to form the Independent Labour Party (ILP) the following year. He lost his seat in 1895, but was re-elected to parliament in 1900 for Merthyr Tydfil in South Wales. In the same year he helped to form the union-based Labour Representation Committee, which was later renamed the Labour Party.
After the 1906 election, Hardie was chosen as the Labour Party's first parliamentary leader. He resigned in 1908 in favour of Arthur Henderson, and spent his remaining years campaigning for specific causes, such as women's suffrage, self-rule for India, and opposition to World War I. He died in 1915 while attempting to organise a pacifist general strike. Hardie is seen as a key figure in the history of the Labour Party and has been the subject of multiple biographies. Kenneth O. Morgan has called him "Labour's greatest pioneer and its greatest hero".


- "James Mavor met Keir Hardie for the first time in 1879: "When I first met him he was an alert, good-looking young man - reddish hair, ruddy complexion, honest but ecstatic eyes, average stature, very fastidious about his dress..."  https://spartacus-educational.com/PRhardie.htm

- "In his late teens and early twenties he was an attractive young man with a strong figure, red beard and thick curly hair, who had several girlfriends."  https://books.google.it/books… 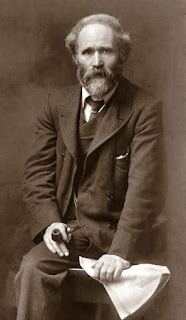