William Kirkpatrick Magee (1868 – 1961). Irish author, editor and librarian, who as an essayist and poet adopted the pen-name of John Eglinton. He became head librarian of the National Library of Ireland, after opposing the "cultural nationalism" of his time. From 1904 to 1905 he edited the literary journal Dana and was the biographer of George William Russell.

- "I noticed a thin, small man with dark red hairgrowing stiffy over a small skull..."   https://books.google.it/books… 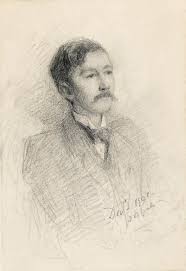