Jacques Pierre Vaché (1895 . 1919). French writer and founder of Surrealism.
In 1913, along with Eugène Hublet, Pierre Bissérié and Jean Bellemère, he published the only issue of the magazine «En route mauvaise troupe» and the four pamphlets of «Canard Sauvage».
During the First World War he was wounded near Brest, in France, and the following year he met André Breton in the hospital of Nantes. This meeting will be at the basis of the surrealist theory.
He died from an overdose of opium.


- "His red hair, his 'dead flame' eyes and the glacial butterfly of his monocle..."  https://books.google.it/books…

- "... he was a cold, cynical bastard who made his own life into a myth, dressing very elegantly, with every hair in place—he had bright red hair—and doing anything he could think of to shock people in public."  https://artauddesnosthenovel.com/…/from-book-2-jacques-vac…/

- "One year older than I, he was a very elegant man with red hair..."  https://books.google.it/books… 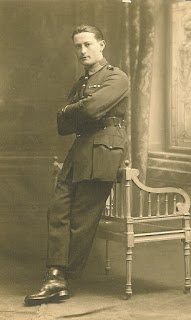