James Henry "Red" Duke, Jr. (1928 – 2015). American trauma surgeon and professor at The University of Texas Health Science Center at Houston and Memorial Hermann-Texas Medical Center, where he worked on-site since 1972. He was instrumental in introducing Memorial Hermann's Life Flight program and bringing a level I trauma center to Houston. Outside Texas, he is probably most famous for the nationally syndicated television spot called Texas Health Reports or Dr. Red Duke's Health Reports, which aired on local television stations in the United States for fifteen years.
Duke was a fourth-year surgery resident at Parkland Hospital the day President John F. Kennedy and Texas Gov. Connally were shot and rushed to that hospital. Upon their arrival, Duke says, "It didn't take long to appreciate the gravity of the situation." When asked what can you do for him, he said, "I can't do much for a dead man." He is credited with saving the life of Gov. Connolly.
Duke was a founding member of the American Trauma Society and was an Advanced Trauma Life Support instructor for the American College of Surgeons. He was named Surgeon of the Year by the James F. Mitchell Foundation in 1988. Duke's efforts to educate the public in health issues and tireless work as a crusader against trauma brought him into serious consideration for the position of Surgeon General of the United States in 1989.


- "In short order the growing child would develop a headful of bushy red hair and he would forever be known as Red, Red Duke."  https://books.google.it/books…

- "He grew up in Hillsboro and was given the nickname “Red” for his curly red hair."  https://webcache.googleusercontent.com/search…

- "There he acquired his nickname, “Red,” for his curly red locks."  http://webcache.googleusercontent.com/search…

- "During his childhood, he earned the nickname “Red” because of his curly reddish hair..."  https://www.tmc.edu/…/uthealth-art-wall-remembers-dr-james…/ 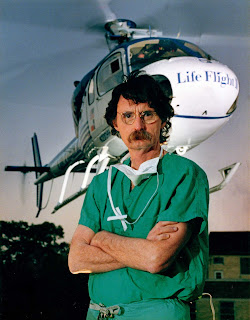