Georgette Leblanc (1869 – 1941). French operatic soprano, actress, author, and sister of novelist Maurice Leblanc (creator of Arsène Lupin). She became particularly associated with the works of Jules Massenet and was an admired interpreter of the title role in Bizet's Carmen.
For many years Leblanc was the lover of Belgian playwright and writer Maurice Maeterlinck, and he wrote several parts for her within his stage plays. She portrayed the role of Ariane in Ariane et Barbe-bleue, both in the original 1899 stage play by Maeterlinck and in the 1907 opera adaptation by Paul Dukas. Leblanc also appeared in a couple of French films, most notably L'Inhumaine in 1924. In the last few decades of her life she turned to writing, producing two commercially successful autobiographies and several children's books and travelogues.


- "Her hair is wonderfully red, the mask of her face a peculiarly expressive one."  https://books.google.it/books… 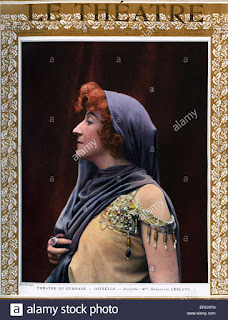 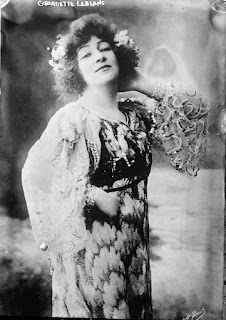