William Clark (1770 – 1838). American explorer, soldier, Indian agent, and territorial governor. Along with Meriwether Lewis, Clark helped lead the Lewis and Clark Expedition of 1804 to 1806 across the Louisiana Purchase to the Pacific Ocean, and claimed the Pacific Northwest for the United States. Before the expedition, he served in a militia and the United States Army. Afterward, he served in a militia and as governor of the Missouri Territory. From 1822 until his death in 1838, he served as Superintendent of Indian Affairs.
Brother of George Clark.

- “It is significant of his repute among [Indians],” Coues continued, “that St. Louis was for them
simply the Red-head’s town.” http://www.lewisandclark.org/wpo/pdf/vol40no2.pdf

- "Captain William Clark, the red-haired co-captain of the Corps of Discovery, was born on August 1, 1770, the sixth son and ninth child from a family of 10 children." https://www.pbs.org/lewisandclark/inside/wclar.html 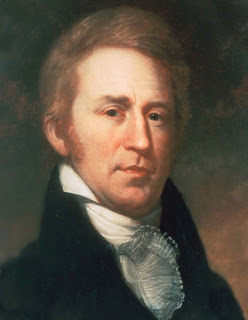 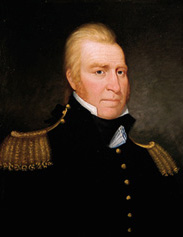