Sir Henry Sidney (1529 – 1586). Lord Deputy of Ireland. He was brought up at court as the companion of Prince Edward, afterwards King Edward VI, and he continued to enjoy the favour of the Crown, serving under Mary I of England and then particularly throughout the reign of Queen Elizabeth I. He was instrumental in the Elizabethan conquest of Ireland, serving as Lord Deputy three times. His career was controversial both at home and in Ireland.
Sidney married Mary Dudley, eldest daughter of John Dudley, 1st Duke of Northumberland, in 1551. They would have three sons and four daughters. His eldest son was Sir Philip Sidney, and his second was Robert Sidney, 1st Earl of Leicester.
His daughter Mary Sidney married Henry Herbert, 2nd Earl of Pembroke, and by reason of her literary achievements was one of the most celebrated women of her time. 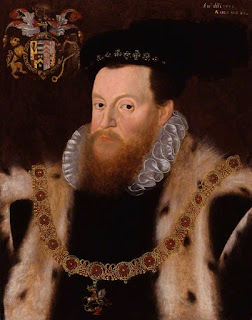