Galileo Galilei (1564 - 1642). Astronomer, physicist, engineer, philosopher, and mathematician. He has been called the "father of observational astronomy", the "father of modern physics", the "father of the scientific method", and even the "father of science".
Galileo studied speed and velocity, gravity and free fall, the principle of relativity, inertia, projectile motion and also worked in applied science and technology, describing the properties of pendulums and "hydrostatic balances", inventing the thermoscope and various military compasses, and using the telescope for scientific observations of celestial objects. His contributions to observational astronomy include the telescopic confirmation of the phases of Venus, the discovery of the four largest satellites of Jupiter, the observation of Saturn's rings (though he could not see them well enough to discern their true nature) and the analysis of sunspots.

"...his large frame lumbering forward and his red hair flowing..."


"He had red hair, a short temper, a mastery of language, a gift for mockery in debate and a liking for wine."


"In appearance he was a short, stocky man with flaming red hair and a temper to match his hair" 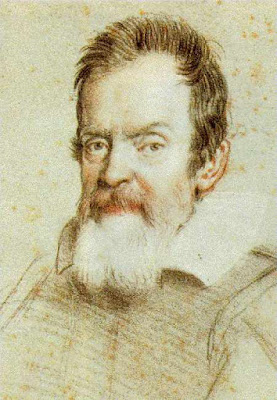