Malcolm Little, known as Malcolm X (1925 – 1965). American Muslim minister and human rights activist who was a popular figure during the civil rights movement. He is best known for his controversial advocacy for the rights of blacks; some consider him a man who indicted white America in the harshest terms for its crimes against black Americans, while others accused him of preaching racism and violence.

Born Malcolm Little in Omaha, Nebraska, he relocated to New York City's Harlem neighborhood in 1943, after spending his teenage years in a series of foster homes following his father's death and his mother's hospitalization. In New York, Little engaged in several illicit activities, and was eventually sentenced to ten years in prison in 1946 for larceny and breaking and entering. In prison, he joined the Nation of Islam (NOI) and changed his name to Malcolm X. After being paroled in 1952, he quickly became one of the organization's most influential leaders.
During the civil rights movement, Malcolm X served as the public face of the controversial group for a dozen years, where he advocated for black supremacy, the separation of black and white Americans, and rejected the notion of the civil rights movement for its emphasis on racial integration. He also expressed pride in some of the social achievements he made with the Nation, particularly its free drug rehabilitation program. In the 1950s, Malcolm X endured surveillance from the FBI for the Nation's supposed links to communism.
In the 1960s, Malcolm X began to grow disillusioned with the Nation of Islam, and in particular, with its leader Elijah Muhammad. Expressing many regrets about his time with them, which he had come to regard as largely wasted, he instead embraced Sunni Islam. Malcolm X then began to advocate for racial integration and disavowed racism after completing Hajj, whereby he also became known as el-Hajj Malik el-Shabazz. After a brief period of travel across Africa, he notably repudiated the NOI, and founded Muslim Mosque, Inc. (MMI) and the Organization of Afro-American Unity (OAAU) to emphasize Pan-Africanism.


"Malcolm X was referred to as "Detroit Red" because of the reddish hair he inherited from his Scots maternal grandfather." https://en.wikipedia.org/wiki/Malcolm_X

- On top of my head was this thick smooth sheen of red hair - real red - as straight as any white man's..."  https://books.google.it/ 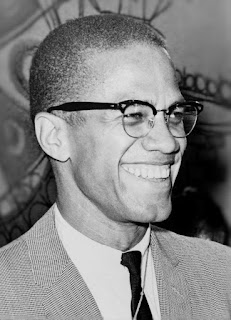