David Herbert Lawrence (1885 – 1930). English novelist, poet, playwright, essayist, literary critic and painter.
His collected works represent, among other things, an extended reflection upon the dehumanising effects of modernity and industrialisation. Some of the issues Lawrence explores are sexuality, emotional health, vitality, spontaneity, and instinct.
Lawrence's opinions earned him many enemies and he endured official persecution, censorship, and misrepresentation of his creative work throughout the second half of his life, much of which he spent in a voluntary exile he called his "savage pilgrimage". At the time of his death, his public reputation was that of a pornographer who had wasted his considerable talents. Later, the literary critic F. R. Leavis championed both his artistic integrity and his moral seriousness.

- “ If, however, we draw simply upon memoirs written of Lawrence by people who knew him some extraordinary divergences can be observed. His Croydon headmaster, who met him in 1908, remembered him as having "a shock of dark hair", and at least one other person who knew him when young referred to him as "dark-haired".
Helen Corke, however, who first saw him in 1909, recalled "fair hair," as did Ford Madox Hueffer and Violet Hunt, first seeing him late in 1909, who remembered "sun-shot tawny hair" and "yellow hair". In 1917, Esther Andrews noted "ash-coloured hair," while a Berkshire friend, Cecily Lambert, the following year, saw "mousey blonde hair".
In 1923, Dorothy Brett saw "dark, gold hair"; three years later, Montague Weekley thought Lawrence "sandy-haired". David Garnett, however, who met him in 1912, recalled his hair tint as "bright mud-colour, with a streak of red in it"; Catherine Carswell remembered "thick dust-coloured hair" in 1914, and Richard Aldington, who also met him in 1914, remembered his "bright red hair".
Ottoline Morrell remembered a "mass of red hair," though the writer Douglas Goldring recalled only "a reddish 'quiff'": but Compton Mackenzie (who saw him in 1914 and again in 1920) thought he had "wavy reddish hair", and Rebecca West (1892-1983) described his hair in 1921 as "pale luminous red".
Lawrence himself once remarked that his hair had "got no particular colour at all", but he also responded to someone who remarked that - with red hair like his - of course he would have a temper, "announcing that his hair was not red, that it used to be pure yellow gold and now was brown; his beard might be red, but his hair was golden brown!" https://books.google.it/books…


- “He was a slight man, lithe and delicately built, his pale face rather overshadowed by his beard and his red hair falling over his foreheadhis eyes blue and his hands delicate and very competent.” https://books.google.it/books… 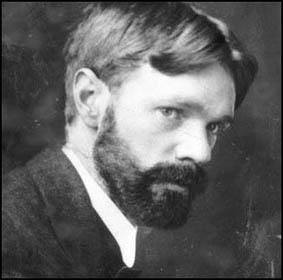