Alexandre Dumas (born Dumas Davy de la Pailleterie 1802 – 1870), also known as Alexandre Dumas père. French writer. His works have been translated into many languages, and he is one of the most widely read French authors. Many of his historical novels of high adventure were originally published as serials, including The Count of Monte Cristo, The Three Musketeers, Twenty Years After and The Vicomte de Bragelonne: Ten Years Later.

- "As Dumas was about to sit down for the performance, someone made a comment about his head of bushy red hair." https://encyclopedia2.thefreedictionary.com/Dumas%2C+Alexan… 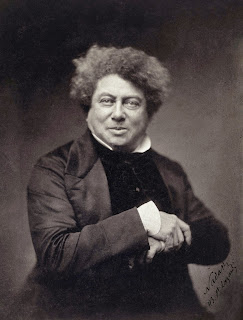