Mona von Bismarck (née Strader; 1897 – 1983), also known as Mona Bismarck. American socialite, fashion icon and philanthropist. Her five husbands included Harrison Williams, among the richest men in America, and Count Albrecht Edzard von Bismarck-Schönhausen, a grandson of German Chancellor Otto von Bismarck. She was the first American to be named "The Best Dressed Woman in the World" by a panel of top couturiers, including Coco Chanel, and she was also named to the International Best Dressed List Hall of Fame.


- "She was absolutely fantastic and one of the most beautiful women I ever saw, with her green eyes and red hair..." http://theesotericcuriosa.blogspot.com/…/kentuckyian-counte…

- "She had wide set, green eyes for which she was quite famous, and striking red hair — a combination of Anglo exoticism that evokes fairies, or sirens." https://medium.com/…/salvador-dalis-nasty-woman-f484467e3555 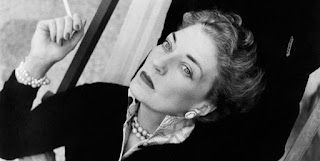