- “He looked like a balding and slightly tougher version of the cutest-looking freckle-faced country boy you ever saw,” Mr. Wolfe wrote. “He had a snub nose, light-hazel eyes, reddish-blond hair and a terrific smile.” https://www.nytimes.com/2016/12/08/us/john-glenn-dies.html…

- "I weighed nine pounds and had my mother's red hair."  https://books.google.it/ 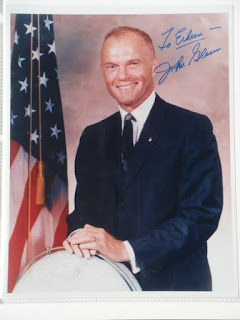