John Hunter (1728 – 1793). Scottish surgeon, one of the most distinguished scientists and surgeons of his day. He was an early advocate of careful observation and scientific method in medicine. He was a teacher of, and collaborator with, Edward Jenner, pioneer of the smallpox vaccine.
He learned anatomy by assisting his elder brother William with dissections in William's anatomy school in Central London, starting in 1748, and quickly became an expert in anatomy. He spent some years as an Army surgeon, worked with the dentist James Spence conducting tooth transplants, and in 1764 set up his own anatomy school in London.
His wife, Anne Hunter (née Home), was a poet, some of whose poems were set to music by Joseph Haydn.

- "I must say, however, that I do sympathise with Anne Hunter because with that straggling and wispy red hair fringing his face, John Hunter does not impress me as a giant of his profession..." https://europepmc.org/backend/ptpmcrender.fcgi… 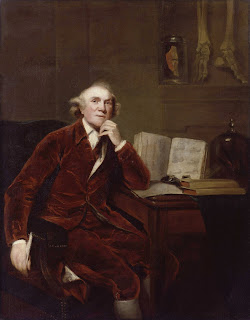