James Murray Kempton (1917 – 1997). American journalist and social and political commentator. He won a National Book Award in 1974 (category, "Contemporary Affairs") for The Briar Patch: The People of the State of New York versus Lumumba Shakur, et al. Reprinted, 1997, with new subtitle The Trial of the Panther 21.) He won a Pulitzer Prize (category, "Commentary") in 1985 "for witty and insightful reflection on public issues in 1984 and throughout a distinguished career."


- "And he had this amazing red hair that just launched out of his head, like Elsa Lanchester’s hair in The Bride of Frankenstein."  https://www.cosanostranews.com/…/kemptons-close-encounters-…

- "Kempton had reddish hair in a crew cut..."  https://books.google.it/books…

- "He never learned to drive and could sometimes be spotted on a midtown street, a red-haired, three-piece-suited reporter..."  https://books.google.it/books… 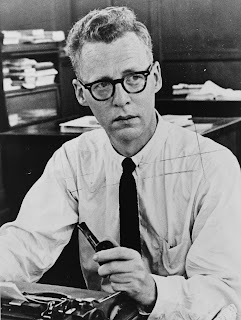