William Franklin Conkright (1914 – 1980), known more commonly by the nickname Red. American football center and end who played eight seasons in the National Football League (NFL) and was later the head coach of the Oakland Raiders for part of the 1962 season.

- "He was nicknamed "Red" because of his red hair."  https://en.wikipedia.org/wiki/Red_Conkright 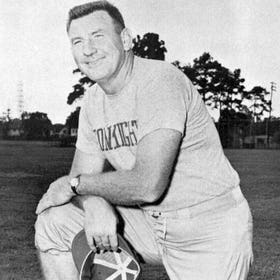