Clarence Howeth "Ginger" Beaumont (1876 – 1956). American center fielder in Major League Baseball who spent most of his career with the Pittsburgh Pirates (1899–1906) and Boston Braves (1907–1909). During the years 1900–1904 – with the Pirates winning pennants from 1901–1903 – Beaumont led the National League in hits three times, scored 100 runs four times, leading the league once, and also captured the 1902 batting championship with a .357 mark. As the Pirates' regular leadoff hitter, he was the first player ever to bat in a World Series game.
Beaumont has a baseball field named after him in his hometown of Burlington. His name also represents part of the Burlington Little League organization. In July 2015, a monument to Beaumont was dedicated at Beaumont Field. 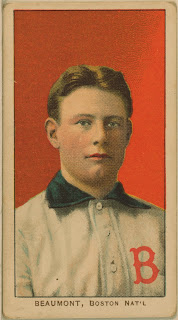