Michel Adanson (1727 – 1806). French botanist and naturalist of Scottish descent.
Adanson was an early proponent of the inheritance of acquired characters and a limited view of evolution. In an article for the Histoire and Memoires de l'Academie Royale des Sciences of 1769, he used the term "mutations" to refer to small changes that could bring about new variations in individuals. Despite being described as a "precursor of evolutionism" by historians, Adanson rejected the concept of species, preferring to focus on individuals and denied the transmutation of species.

- "One of these was Michel Adanson, a French naturalist,, small in stature, with vast energy, a huge head and masses of red hair."  https://books.google.it/books… 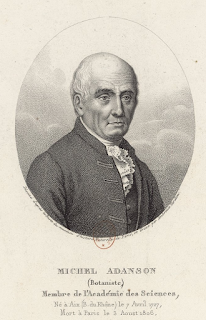