George Brown (1818 – 1880). Scottish-Canadian journalist, politician and one of the Fathers of Confederation; attended the Charlottetown (September 1864) and Quebec (October 1864) conferences. A noted Reform politician, he is best known as the founder and editor of the Toronto Globe, Canada's most influential newspaper at the time. He was an articulate champion of the grievances and anger of Upper Canada (Ontario). He played a major role in securing national unity. His career in active politics faltered after 1865, but he remained a powerful spokesman for the Liberal Party promoting westward expansion and opposing the policies of Conservative Prime Minister John A. Macdonald.

- "His red hair was fading somewhat into brown..."  https://epdf.pub/brown-of-the-globe-statesman-of-confederat…

- "His tall, erect figure had not noticeably wasted, his red hair had not turned grey..."  https://books.google.it/books… 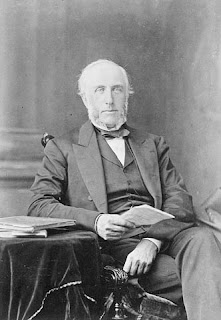