Carmelita Torres (1900 - ?). Mexican woman known for starting the 1917 Bath riots on the Mexico-United States border between Ciudad Juárez, Chihuahua and El Paso, Texas. At the time of the riots, she was 17 years old and working as a maid in the United States. She has been called "the Latina Rosa Parks".

- “Led by Carmelita Torres, an auburn-haired young woman of 17..."  https://www.zinnedproject.org/mater…/women-in-labor-history/


- "Described as an “auburn-haired amazon,” Torres, just a teenage girl at the time, initiated a little-known revolt called the bath riot."  https://wearemitu.com/…/remembering-carmelita-torres-the-t…/ 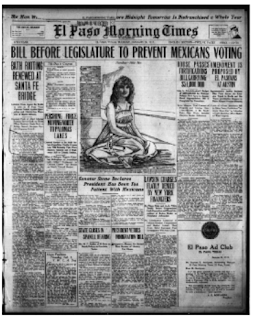