Elizabeth Gurley Flynn (1890 – 1964). American labor leader, activist, and feminist who played a leading role in the Industrial Workers of the World (IWW). Flynn was a founding member of the American Civil Liberties Union and a visible proponent of women's rights, birth control, and women's suffrage. She joined the Communist Party USA in 1936 and late in life, in 1961, became its chairwoman.

- "There he met the legendary working-class leader, Elizabeth Gurley Flynn, an organizer from the IWW, whose stirring oratory and boundless courage combined with her flaming red hair and alabaster skin..."  https://webcache.googleusercontent.com/search…


- "Flynn, a striking auburn-haired 19-year-old, was a few weeks pregnant when she came to Missoula in September of 1909."  https://libcom.org/history/1909-missoula-free-speech-fight

- "Within weeks, the pregnant, auburn-haired beauty would be carrying out her mission on a bigger stage..."  https://books.google.it/books… 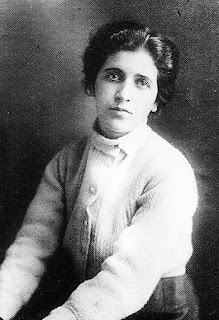