Dwight David "Ike" Eisenhower (1890 – 1969). American politician and Army general who served as the 34th President of the United States from 1953 until 1961. During World War II, he served as Supreme Commander of the Allied Expeditionary Force in Europe, and achieved the rare five-star rank of General of the Army. He was responsible for planning and supervising the invasion of North Africa in Operation Torch in 1942–1943 and the successful invasion of Normandy in 1944–1945 from the Western Front.

His wife was Mamie Geneva Doud.

- "How about Dwight Eisenhower? Ike was a redhead. (He was younger then.)" http://www.smithsonianmag.com/arts-culture/requiem-for-the-redhead-44791525/

- "All, apparently, were of famous gingers, celebrated redheads who represented the ideal of the society, that red hair conferred upon one the obligation to achieve great things. Most of the portrait subjects I recongnized, Winston Churchill, George Washington, Thomas Jefferson, Dwight Eisenhower." https://books.google.it/books… 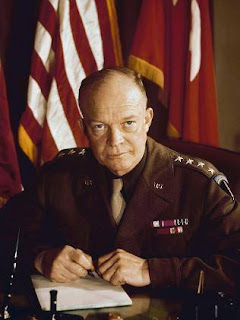