Robert "Bob" Benge (c. 1762–1794), called Captain Benge (or "The Bench" to frontiersmen). One of the most feared Cherokee leaders on the frontier during the Cherokee–American wars (1783-1794) in the area of present-day Southwest Virginia.
He was the son son of a Cherokee woman, Wurteh Watts, and a Scots-Irish trader named John Benge, who lived full-time among the Cherokee.

- "Robert grew up as a Cherokee, but with his red hair, European look, and his good command of English, he could also pass as a pure Euro-American."  http://www.luftex.com/benge-bob.html


- "Also known as the Bench, he was a red-headed Chickamauga War Cherokee Chief, half-brother of Sequoyah and son of John Benge and Red Paint Clan Mother, Wurteh Watts."  https://www.claycountykentucky.org/history/indians/ 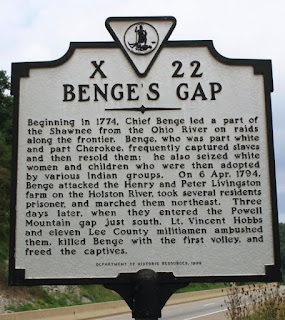