Jonathan Gold (1960 – 2018). American food and music critic. He wrote for the Los Angeles Times and had previously written for LA Weekly and Gourmet, as well as being a regular on KCRW's Good Food radio program. Gold often chose small, traditional immigrant restaurants for his reviews, although he covered all types of cuisine. In 2007, he became the first food critic to win the Pulitzer Prize for Criticism.

- "... his forehead in his hands, the iconic red hair slipping out from between his fingers like liquid."  https://www.sfchronicle.com/…/Jonathan-Gold-made-dreams-com…


- "Lately, he has been wearing a small close-cropped mustache, and his hair, a graying red cascade, curls over his shoulders."  https://www.newyorker.com/magazine/2009/11/09/the-scavenger

- "He has shoulder-length light-red hair, a flesh-colored mustache, and freckles that reach up to the top of his head."  https://www.gq.com/story/jonathan-gold-gutsiest-food-critic

- "With his long dusty red hair and faded freckles, Mr. Gold, 46, looks like that guy at a flea market who kneels on the ground to rifle through a box of vintage Sex Pistols L.P.s'."  https://www.nytimes.com/2007/05/06/fashion/06NightOut.html 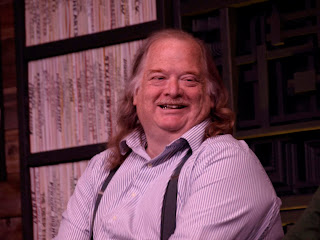