Sir Richard Francis Burton (1821 – 1890). British explorer, geographer, translator, writer, soldier, orientalist, cartographer, ethnologist, spy, linguist, poet, fencer, and diplomat. He was famed for his travels and explorations in Asia, Africa and the Americas, as well as his extraordinary knowledge of languages and cultures. According to one count, he spoke 29 European, Asian and African languages.
Burton's best-known achievements include: a well-documented journey to Mecca in disguise, at a time when Europeans were forbidden access on pain of death; an unexpurgated translation of One Thousand and One Nights (commonly called The Arabian Nights in English after early translations of Antoine Galland's French version); the publication of the Kama Sutra in English; a translation of The Perfumed Garden, the Arab Kama Sutra; and a journey with John Hanning Speke as the first Europeans to visit the Great Lakes of Africa in search of the source of the Nile.
Burton was a captain in the army of the East India Company, serving in India, and later briefly in the Crimean War. Following this, he was engaged by the Royal Geographical Society to explore the east coast of Africa, where he led an expedition guided by locals and was the first European known to have seen Lake Tanganyika.


- "Richard Francis Burton was born at Torquay 29 on 19th March 1821; and to the intemperate joy of the family his hair was a fierce and fiery red. [...] Richard's hair gradually turned from its fiery and obtrusive red to jet black, but the violent temper of which the former colour is supposed to be indicative, and of which he had already many times given proofs, signalised him to the end of life."  http://www.gutenberg.org/files/4315/4315-h/4315-h.htm

- "Baker was ecstatic when little Richard was born with flaming-red hair and although it later turned black, his temper remained red to the end."  https://books.google.it/books… 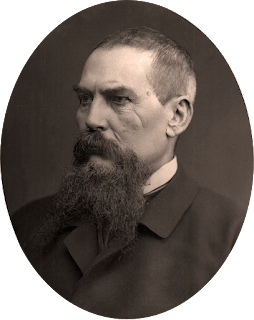