Robert Myron Coates (1897 – 1973). American writer and a long-term art critic for the New Yorker. He used the term "abstract expressionism" in 1946 in reference to the works of Hans Hofmann, Arshile Gorky, Jackson Pollock and Willem de Kooning and others.
As a writer of fiction, he is considered a member of the Lost Generation, having spent part of his life abroad in Europe. His first three novels are highly experimental, drawing upon Dada, surrealism and expressionism for their effect. His last two novels are examples of crime fiction in which the narrator presents a psychopathological case study of the protagonist. Nowadays, Coates is best known for The Outlaw Years (1930), which deals with the history of the land pirates of the Natchez Trace.


- "... but we often meet Coates hatless and red-headed in the most unexpected places."  https://books.google.it/books…

- "In it, the writer Amberman - a character modelled on Robert Coates himself, and no doubt named after his stunning mass of orange-red hair - ..."  https://books.google.it/books…

- "All I remember abot his visit was his brilliant red hair!"  https://books.google.it/books…

- "His tall, red-haired figure grew to be familiar, almost ubiquitous, landmark in the American haunts of Montparnasse."  https://dialnet.unirioja.es/descarga/tesis/71412.pdf 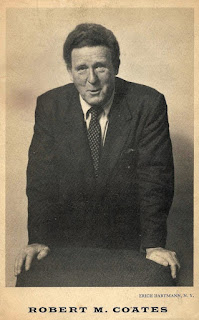