Robert Dickson (c.1765 – 1823). Scottish-born fur trader and agent for the Indian Department in Upper Canada, who played a prominent part in the War of 1812.
During the years preceding the War of 1812, Dickson and other British and Canadian traders were angered by American encroachments into the area where they previously enjoyed a monopoly. As war appeared imminent, Dickson recruited over 100 warriors from the "Western Indians" (from the present-day states of Wisconsin, Michigan and Illinois) and gathered them at the British military outpost at Fort St. Joseph.
When news of the outbreak of war arrived, Dickson led a total of 400 Indians in an expedition led by Captain Charles Roberts, which captured Mackinac Island from its unwary American garrison. He subsequently led the Western Indians south to join the British army at Amherstburg, where they took part in the Siege of Detroit, which caused the surrender of an American army. In the autumn following these victories, Dickson travelled to Montreal, where he was appointed to the Indian Department as Agent and Superintendent for the Western Indian tribes.


- "A burly Scot, of full face, tall and commanding, Dickson had been referred to often in council by Indian spokesmen as the Red Head because of his flaming red hair and beard."  http://www.biographi.ca/en/bio/dickson_robert_6E.html

- "He was born in Scotland and was known for his fiery red hair and beard, and the Dakota called him “Red Head” or Pahin sa sa ."  https://dakotalessons.ca/…/uploa…/2018/01/Robert-Dickson.pdf

- "Robert Dickson, a tall Scotsman with flaming red hair, had been appointed Indian Agent for the First Nations of the far North West Territories."  https://books.google.it/books… 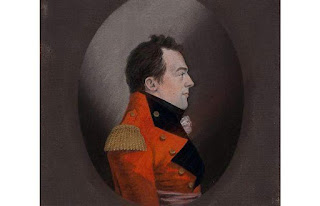