William Ward (1752 – 1822). Founder of Urbana, Ohio, and one of the original settlers in Kentucky's Mason County and Ohio's Mad River Valley.
He started exploring the area of the Mad River Valley of Ohio in 1788, together with his friend and business associate Simon Kenton.
In 1805 Ward appeared at the General Assembly in Chillicothe and successfully lobbied for the establishment of a new county to be made up of portions of Greene and Franklin Counties. Champaign County was formed on February 20, 1805 and extended on the north to Lake Erie and included all of present Clark County on the south.
Ward had the business sense and foresight to purchase 160 acres which he considered the logical and most acceptable site for Champaign's county seat. He approached the county commissioners with a proposition to locate the seat of the new county on this tract. Ward suggested that site to divided into 212 lots and 22 out-lots, half of which, selected alternately, were to be given to the county and while Ward would retain the remainder. Ward also offered two lots for a cemetery and a tract for the public square. The county commissioners approved the proposal, and Ward, with Joseph C. Vance, entered into a written agreement on October 11, 1805. Ward named the new county seat, Urbana.
Two of his grandsons were John Quincy Adams Ward and Edgar Melville Ward.


- "He was "tall and broad-shouldered, with high cheek bones, keen eyes and dark auburn hair tied with a black ribbon in a long queue, erect in person and very neat in dress."  https://en.wikipedia.org/wiki/William_Ward_(frontiersman) 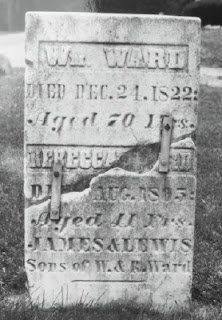