Francine Larrimore (1898 – 1975). French-born American stage and screen actress.
She was the niece of the Yiddish stage star Jacob Adler.
Larrimore began her stage career in 1910. In 1926 she created the role of Roxie Hart in the Broadway premiere of Chicago (whose plot is based on the story of Beulah Annan). She played Theodora Gloucester in the 1921 Broadway comedy Nice People. She appeared in a string of silent films in the 1910s, i.e. The Devil's Darling (1915), The Princess From The Poorhouse aka The Royal Pauper (1917) and Max Wants a Divorce (1917) co-starring Max Linder. Most are now considered lost films.

- "Lovely to look at with her golden red hair, her beautiful eyes, her expressive mouth..."  https://www.jta.org/…/francine-larrimore-scoffs-at-glamour-… 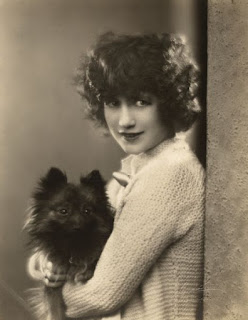