Sir Robert Dudley (1574 – 1649). English explorer and cartographer. In 1594 he led an expedition to the West Indies, of which he wrote an account. The illegitimate son of Robert Dudley, 1st Earl of Leicester, he inherited the bulk of the Earl's estate in accordance with his father's will. In 1603–1605 he tried unsuccessfully to establish his legitimacy in court. After that he left England forever, finding a new existence in the service of the grand dukes of Tuscany. There, he worked as an engineer and shipbuilder, and designed and published Dell'Arcano del Mare (1645-1646), the first maritime atlas to cover the whole world. He was also a skilled navigator and mathematician. In Italy, he styled himself "Earl of Warwick and Leicester", as well as "Duke of Northumberland", a title recognized by Emperor Ferdinand II.


- "He was a handsome, personable man, tall of stature, red hair'd, and of admirable comport..."  https://archive.org/…/v…/voyageofrobertdu00warnrich_djvu.txt

- "... in his person tall and well-shaped, having a fresh and fine complexion, but red-haired..."  https://books.google.it/books… 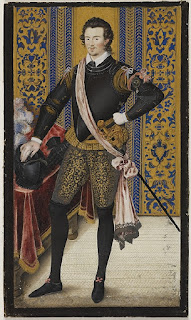