James Ludovic Lindsay, 26th Earl of Crawford and 9th Earl of Balcarres, (1847 – 1913). British astronomer, politician, ornithologist, bibliophile and philatelist. A member of the Royal Society, Crawford was elected president of the Royal Astronomical Society in 1878. He was a prominent Freemason.
Crawford was interested in astronomy from an early age. Along with his father, he built up a private observatory at Dun Echt, Aberdeenshire. He employed David Gill to equip the observatory, using the best available technology. Among his achievements, Gill later made the first photograph of the Great Comet of 1882, pioneering astrophotography and the mapping of the heavens.
Upon hearing of a threat to close down the Edinburgh Royal Observatory, in 1888 Crawford made a donation of astronomical instruments and his books on mathematics and the physical sciences from the Bibliotheca Lindesiana in order that a new observatory could be founded. Thanks to this donation, the new Royal Observatory, Edinburgh was opened on Blackford Hill in 1896.
By the time of his death in 1913 he had amassed the greatest philatelic library of his time, sothat his name was included as one of the "Fathers of Philately" in 1921.


- "There are still a good many people who remember the young Lord Lindsay of those days, his geniality, his remarkable personality and his mannerisms, as well as the fierce expression he could assume on occasion, with his red hair and beard and his blue spectacles..."  https://archive.org/…/d…/davidgillmanastr00forbrich_djvu.txt

- "In a few minutes, I saw what looked to me like a British Lion – a tall man, in a light-coloured tweed suit, with reddish hair and beard."  http://www.eliotsofporteliot.com/evjauncey/1.html 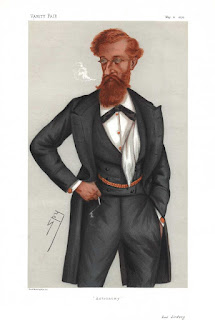 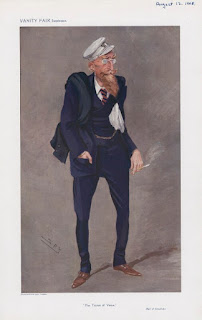