Noah Webster Jr. (1758 – 1843). American lexicographer, textbook pioneer, English-language spelling reformer, political writer, editor, and prolific author. He has been called the "Father of American Scholarship and Education". His "Blue-backed Speller" books taught five generations of American children how to spell and read. Webster's name has become synonymous with "dictionary" in the United States, especially the modern Merriam-Webster dictionary that was first published in 1828 as An American Dictionary of the English Language.
In 1806 he published his first dictionary, A Compendious Dictionary of the English Language. The following year, he started working on an expanded and comprehensive dictionary, finally publishing it in 1828. He was very influential in popularizing certain spellings in the United States. He was also influential in establishing the Copyright Act of 1831, the first major statutory revision of U.S. copyright law. While working on a second volume of his dictionary, Webster died in 1843, and the rights to the dictionary were acquired by George and Charles Merriam.

- "But then, everything changed when I found, inside, a lock of Noah Webster’s hair, red and wispy."  http://www.hemisphericinstitute.org/…/en/e-misferica…/lepore

- "His gray eyes were flecked with brown and his red hair never would behave."  https://books.google.it/books… 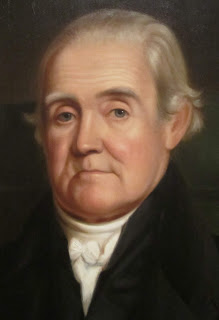