Edward Zane Carroll Judson Sr. (1821 – 1886), known by his pseudonym Ned Buntline. American publisher, journalist, writer and publicist.
An early success that helped launch his fame was The Mysteries and Miseries of New York, a gritty serial story of the Bowery and slums of New York City. In 1844, he adopted the pen name "Ned Buntline". "Buntline" is the nautical term for a rope at the bottom of a square sail.
In 1847, the Boston publisher and dime-novel author Maturin Murray Ballou paid Judson $100 to write The Black Avenger of the Spanish Main: or, The Fiend of Blood, a melodramatic and violent pirate novel. This was followed the same year with The Red Revenger; Or, The Pirate King of the Floridas. Buntline moved Ned Buntline's Own to New York City in 1848.
In 1869 he met William Cody and later claimed that he created the nickname "Buffalo Bill" for the hero of his serial novel Buffalo Bill, the King of the Border Men, published in the New York Weekly beginning 23 December 1869.
In 1872 he wrote a Buffalo Bill play, Scouts of the Prairie, which was performed by Cody himself, Texas Jack Omohundro, the Italian ballerina Giuseppina Morlacchi, and Buntline.The play served as training for Cody's later Wild West show.


- "But stability was not a large part of the volatile, red-headed Judson's own life."  https://books.google.it/books…

- "... and had a pocked face topped with bushy red hair and bushier red mustaches."  https://books.google.it/books…

- "By contrast Buntline was stocky and slightly shorter than average, but he did have red hair..."  https://books.google.it/books… 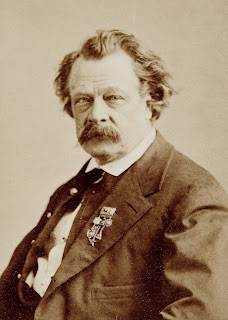