Erastus "Red" Yeager (also spelt Yager, 1831-1864). American outlaw and messenger for Sheriff Henry Plummer’s gang, the Innocents, he would reveal the identities of Plummer and his gang. He was hunged in January 1864 by Montana Vigilantes.
However, various versions of his life are in conflict, with some having him participating in road agent activities long before he ever arrived in Montana and others stating he was an innocent man. In fact, Granville Stuart, Montana Cattle Baron and leader of a later vigilante group called, Stuart’s Stranglers, would adamantly dispute any involvement in the gang.

- "Even his executioners admitted the small, red-headed man had come to a hard end."  https://truewestmagazine.com/a-rope-for-a-rat/

- "Attending this school was a red-headed boy about ten or eleven years old who was a bright intelligent lad, named Erastus Yeager..."  https://books.google.it/books…

- "... the scouts met Erastus Yager, who from the redness of his hair and whiskers was familiarly called Red."  https://books.google.it/books… 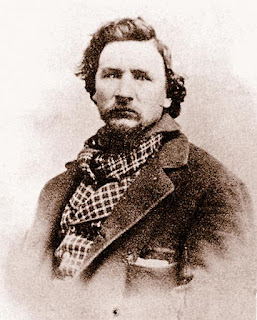