Georg von Vincke (1811 – 1875). Prussian politician, officer, landowner and aristocrat of the Vincke family.
At first he was a supporter of the conservative factions, but from 1852 he increasingly supported the left, and was one of the main opponents of Otto Theodor von Manteuffel. From 1867 to 1869 Vincke was a deputy in the parliament of the North German Confederation.
He is regarded as one of the greatest Prussian orators of his time.
In 1852 he dueled with Otto von Bismarck; the duel ended without injury to either man.


- "He was Baron Georg von Vincke, a red-haired, short-tempered, somewhat overbearing representative of an ancient and distinguished Westphalian family..."  https://books.google.it/books… 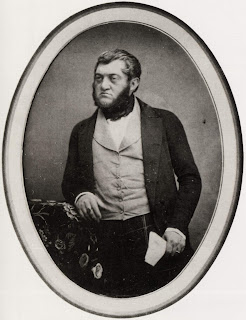