Henry Wax Karnes (1812 – 1840). Soldier and notable figure of the Texas Revolution, as well as commander of General Sam Houston's "Spy Squad" at the Battle of San Jacinto. He worked closely with Deaf Smith.
Both Karnes County and Karnes City, its county seat, are named after him.


- "He was brave, untiring, and a terror to the Indians, who spoke of him as 'Captain Colorado' (Red Captain) because of his red hair and referred to him as 'muy wapo' (very brave). Once, while he was a prisoner of the Comanches, the squaws so admired his red hair that they felt it and washed it to see if the dye would come out, but when they found that color was fast, nothing would satisfy them but that they each should have a lock of his hair."  https://books.google.it/books… 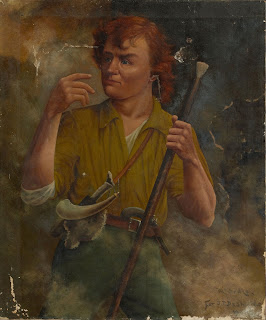