James Whale (1889 – 1957). English film director, theater director and actor, who spent the greater part of his career in Hollywood. He is best remembered for several horror films: Frankenstein (1931), The Old Dark House (1932), The Invisible Man (1933) and Bride of Frankenstein (1935), all considered classics. Whale also directed films in other genres, including the 1936 film version of the musical Show Boat. He became increasingly disenchanted with his association with horror, and many of his non-horror films have fallen into obscurity.


- "Unusually thin, with intense blue eyes, red hair, and “faun-like charm,” he carried himself with a regal bearing."  https://www.missourireview.com/…/james-whale-the-monster-m…/ 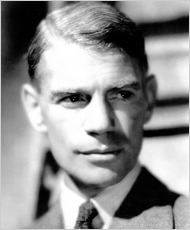