Muriel Enid Gifford (1884 - 1917). Eight child of the twelve children of Frederick and Isabella Gifford, an Irish couple of. unionist-leaning politics.
She was trained as a nurse and in 1912 married the political activist Thomas MacDonagh. They had two childrem, Donagh and Barbara.
Thomas MacDonagh was executed in 1916 and Muriel died of a heart attack a year afterwards, while swimming.
Her sister Grace was married to another leader of the 1916 Easter Rising, Joseph Plunkett.

- "Growing into adulthood, Muriel was described as a tall, striking woman with long red hair."  http://www.theirishstory.com/…/today-in-irish-history-9-j…/…


- "The pupuls sensed more than a passing affair when this red-haired young lady appeared on the scene. [...] fairly tall, with a roseleaf complexion, dark eyes and masses of Titian hair..."  https://books.google.it/books…

- "Several of the girls, inculding Muriel, were red-headed and their mother was ashamed of the fact."  https://books.google.it/books… 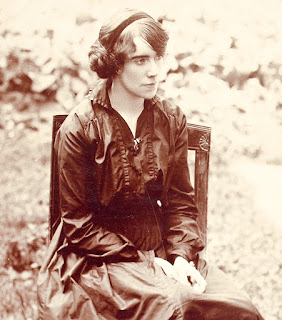