Marie-Florentine Roger (in some sources Royer, 1869 - 1896), better known by her English-sounding model name Sarah Brown. French artist's model famous as the "Queen of Bohemia" in 1890s Paris. Her arrest, along with three other well known artists' models for posing scantily clad as part of tableau vivant floats at the 1893 Bal des Quat'z'Arts in Paris' Latin Quarter, provoked one of the most famous student riots of the late nineteenth century. She modeled for Jules Lefebrve, Georges Rochegrosse and Frederick MacMonnies, among others.

- "... Titian-haired beauty called Sarah Brown... took the name 'Sarah' in tribute to Sarah Bernhardt. As she was judged to look British, or 'celtic', with her long golden red hair she was given the most British surname they could think of, 'Brown'."  http://fannycornforth.blogspot.com/…/tuesday-11th-december-…

- "Her distinguishing physical characteristics were her long hair, variously described as golden or red and her milky skin... she has the virginal features of the Middle Ages, hair the color of fire, and she is built like a statue."  https://books.google.it/books…

- "Sarah's reddish-blond hair and her seductive, gymnastic poses account in part for her popularity in fin-de-siècle ateliers and academies."  https://books.google.it/books… 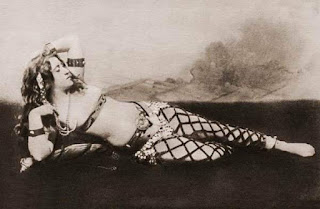